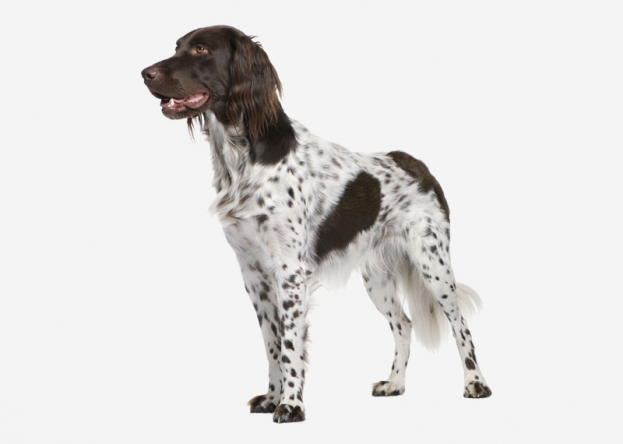 The Small Munsterlander (also SM or Kleiner Münsterländer) is a versatile hunting-pointing-retrieving dog breed that reached its current form in the area around Münster, Germany. The Large Munsterlander is from the same area, but was developed from different breeding stock and is not related as the names would suggest. Small Munsterlanders bear a resemblance to both spaniels and setters but are more versatile while hunting on land and water. The Small Munsterlander is recognized by the Fédération Cynologique Internationale under Group 7, Section 1.2, Continental Pointing Dogs of Spaniel type, by the American Kennel Club as a Foundation Breed, and by The Kennel Club and the United Kennel Club as a gun dog. It is related to the Epagneul Français and the Drentsche Patrijshond.

Due to the breed organizations, responsible kennels, and owners having a strong commitment to the health of the breed, breed programs are overwhelmingly very selective in breeding dogs that are OFA/Penn Hip, CERF, and temperament clear. As a result, instances of congenital diseases and conditions are extremely low and any dog clearly showing physical or behavioral abnormalities shall be disqualified from the breeding program. The breed is robustly healthy with rare issues save dry skin in colder climates and water in its ears after swimming.

Originally a dog bred exclusively for noble families and to work with their families' falconers before guns were used in bird and small game hunting, ancestors of the Small Munsterlander (formerly the Kleiner Munsterlander Vorstehhund) had to work in upland areas to flush prey for the falcon, then allow the falcon to keep the prey until the falconer could retrieve it while the dog pointed at the catch. To this day the Small Munsterlander has excellent close searching and pointing drive. All privileges and immunities of the German nobility as a legally defined class were abolished on August 11, 1919 with the promulgation of the Weimar Constitution, recognising all Germans as equal before the laws of their country. With wider availability of guns and land use for commoners, hunting became more popular, and the breed was further developed as a retriever that worked equally well in the field and water. The breed is considered to be uniquely effective in working as a team with the huntsman in all phases of the hunt, akin to the close cooperation between a sheep herder and Border Collie. It is an elite hunter within the versatile hunting dog arena and is trained to retrieve, hunt, and track the following: Woodcock, Rails, Grouse, Dove, Partridge, Chukar, Quail, Pheasant, Ducks, Geese, Rabbit, Deer, and Fox. The Small Munsterlander is not a far ranging dog usually hunting close in heavier cover and ranging 100-150 yards in light cover all in an effort to maintain the hunting partnership with its owner.

The Small Munsterlander is one of the 4 oldest versatile breeds and the long haired versatile hunting dogs evolved from the Small Munsterlander and flat coated retriever. The Small Munsterlander is thought to be well over 500 years old, originating from the Munster region of Germany but not related to the Large Munsterlander, and documentation of ancestors around the 13th and 14th centuries. By the 1800s the breed had fallen into obscurity. Small Munsterlanders were little known, kept by a few families on farms around Munster. For a half century the few dogs that were bred were primarily companions, and used when hunting to feed the family rather than for sport. It developed a local reputation as the dog to have when a hunter's success or failure determined whether his family would have enough to eat. At the end of the 19th century, a concerted effort was made to re-establish the breed from the remaining lines in the Munster region. The fortunate outcome of the companion phase in the Small Munsterlander history was its excellent in-home personality. Cultural and wildlife use changes slowly put an end to the "bread hunting" and was replaced by recreational hunting. With the advance in firearms, falconry too became outmoded. At the turn of the century, Edmund Lons, brother of the famous hunting and nature poet Hermann Lons, discovered Small Munsterlanders in two towns in Lower Saxony. Lons obtained dogs from two lines. One line consisted of fine boned, agile, lively and intelligent dogs, well known for their "track sound" on the trail. Dogs of the other line were slow in search, of strong build, and excellent in their use of nose. The background and breeding of these dogs could be traced for several generations.

The Small Munsterlander is a rare breed in the United States, numbering around 2000, and demand from hunters outstrips the number of available dogs, so breeders typically give preference to hunters. They're especially hard to come by for non-hunters there and regardless are required to have their dog tested in the field and adhere to maintaining an updated health profile. They are more numerous in Germany, the Netherlands, and the Czech Republic and are bred, trained, and tested to high standards to maintain the superior versatility.

Due to very low prevalence and high standards of the breed organizations, kennels, and owners having a strong commitment to the health of the breed, breed programs are overwhelmingly very selective in breeding dogs and are required to maintain OFA/Penn Hip, CERF, and temperament clear. As a result, instances of congenital diseases and conditions are extremely low.

In the United Kingdom, the breed is rarer still. Recognized by The Kennel Club as an imported breed in 2006, they are still to be established in the hunting community.