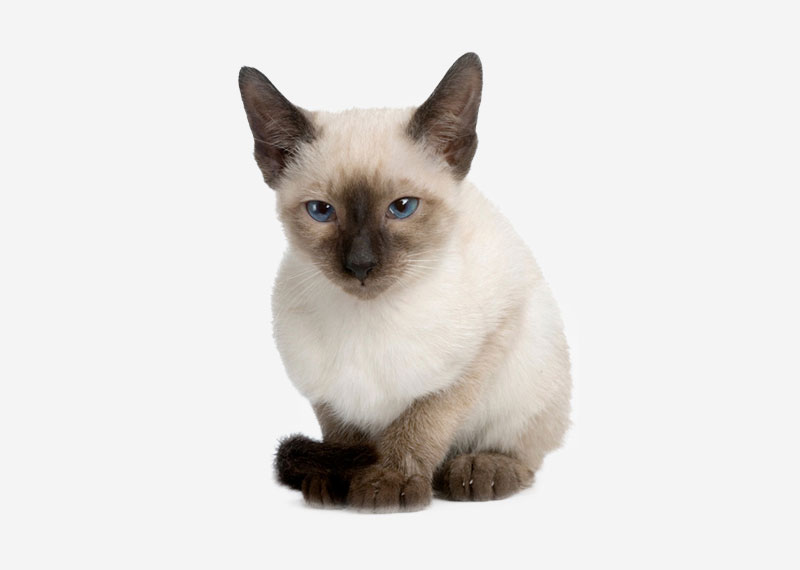 The Siamese (Thai: วิเชียรมาศ,  [wí.tɕʰīan.mâːt], RTGS: Wichianmat, meaning "moon diamond") is one of the first distinctly recognized breeds of Oriental cat. One of several breeds native to Thailand (formerly known as Siam), in the 20th century the Siamese cat became one of the most popular breeds in Europe and North America. The modern Siamese is characterized by blue almond-shaped eyes, a triangular head shape, large ears, an elongated, slender, and muscular body, and point coloration. TICA describes the breed as social, intelligent, and playful into adulthood, often enjoying a game of fetch. Siamese prefer to live in pairs or groups and also seek human interaction. Their Meezer nickname refers to their vocal nature.The Oriental cat was developed in order to expand the range of coat patterns, while the Thai preserves a moderate head and body type.

The pointed cat known in the West as "Siamese", recognized for its distinctive markings, is one of several breeds of cats from Siam described and illustrated in manuscripts called "Tamra Maew" (Cat Poems), estimated to have been written from the 14th to the 18th century. In 1878, U.S. President Rutherford B. Hayes received the first documented Siamese to reach the United States, a cat named "Siam" sent by the American Consul in Bangkok. In 1884, the British Consul-General in Bangkok, Edward Blencowe Gould (1847–1916), brought a breeding pair of the cats, Pho and Mia, back to Britain as a gift for his sister, Lilian Jane Gould (who, married in 1895 as Lilian Jane Veley, went on to co-found the Siamese Cat Club in 1901). In 1885, Gould's UK cats Pho and Mia produced three Siamese kittens—Duen Ngai, Kalohom, and Khromata—who were shown with their parents that same year at London's Crystal Palace Show. Their unique appearance and distinct behaviour attracted attention but all three of the kittens died soon after the show, their cause of death not documented.

By 1886, another pair (with kittens) was imported to the UK by a Miss Eva Forestier Walker (married in 1887 as Mrs Vyvyan or Lady Vyvyan ) and her sister, Ada. Compared to the British Shorthair and Persian cats that were familiar to most Britons, these Siamese imports were longer and less "cobby" in body types, had heads that were less rounded with wedge-shaped muzzles and had larger ears. These differences and the pointed coat pattern, which had not been seen before in cats by Westerners, produced a strong impression—one early viewer described them as "an unnatural nightmare of a cat." Over the next several years, fanciers imported a small number of cats, which together formed the base breeding pool for the entire breed in Britain. It is believed that most Siamese in Britain today are descended from about eleven of these original imports. In their early days in Britain, they were called the "Royal Cat of Siam", reflecting reports that they had previously been kept only by Siamese royalty. Later research has not shown evidence of any organised royal breeding programme in Siam. The original Siamese imports were medium-sized, rather long-bodied, muscular, graceful cats with moderately wedge-shaped heads and ears that were comparatively large but in proportion to the size of the head. The cats ranged from substantial to slender but were not extreme in either way.

Based on Swedish insurance data, which only tracked cats up to 12.5 years, Siamese and Siamese-derived breeds have a higher rate of mortality compared to other breeds. The median lifespan of the Siamese group was somewhere between 10 to 12.5 years. 68% lived to 10 years or more and 42% to 12.5 years or more. The majority of deaths were caused by neoplasms, mainly mammary tumors. The Siamese also has a higher rate of morbidity. They are at higher risk of neoplastic and gastrointestinal problems but have a lower risk of feline lower urinary tract disease. Vet clinic data from England shows a higher median lifespan of 14.2 years.

The most common variety of progressive retinal atrophy (PRA) in cats (among them the Abyssinian, the Somali, and the big group of Siamese-related breeds) is related to a mutation on the rdAc-gene and a DNA-test is available.

The same albino allele that produces coloured points means that Siamese cats' blue eyes lack a tapetum lucidum, a structure which amplifies dim light in the eyes of other cats. The mutation in the tyrosinase also results in abnormal neurological connections between the eye and the brain. The optic chiasm has abnormal uncrossed wiring; many early Siamese were cross-eyed to compensate, but like the kinked tails, the crossed eyes have been seen as a fault and due to selective breeding the trait is far less common today. Still this lack of a tapetum lucidum even in uncross-eyed cats causes reduced vision for the cat at night. This trait has led to their dependence and interest in humans, as it affects their hunting ability, a desirable trait for many owners. However it also makes them vulnerable to urban dangers such as night-time vehicular traffic. Unlike many other blue-eyed white cats. Siamese cats do not have reduced hearing ability. 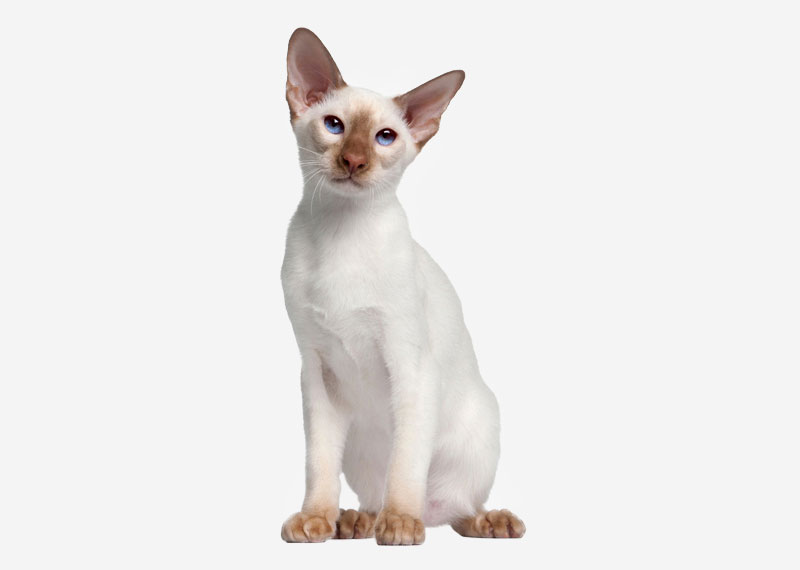 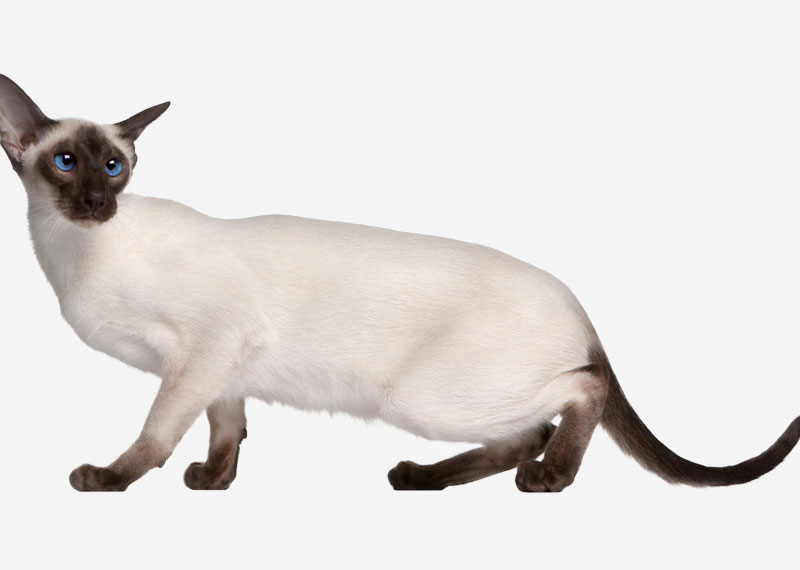 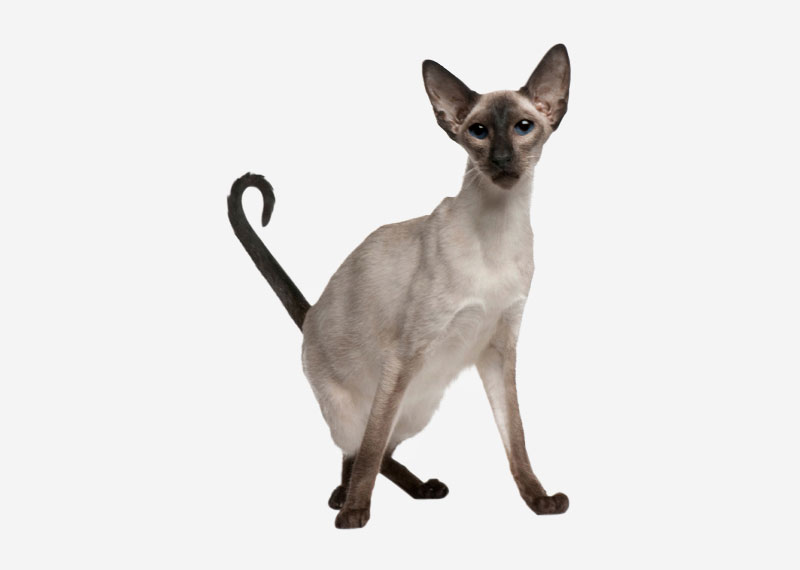 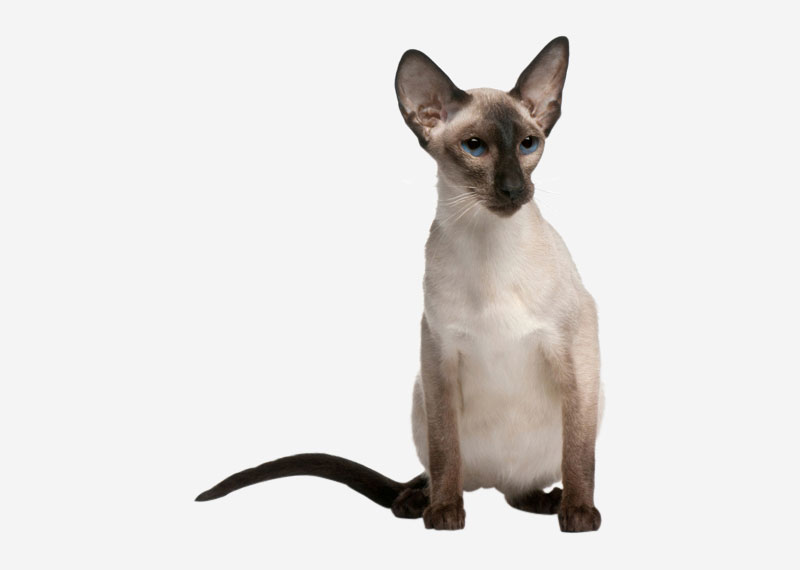 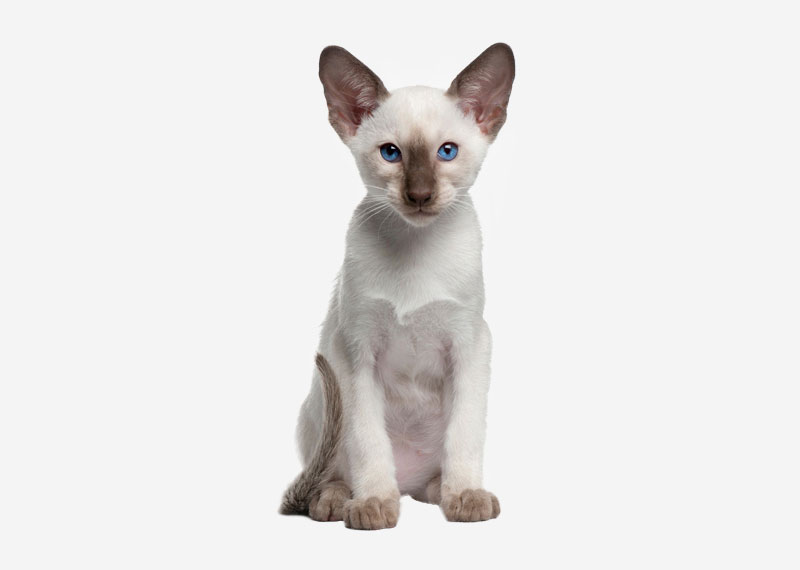 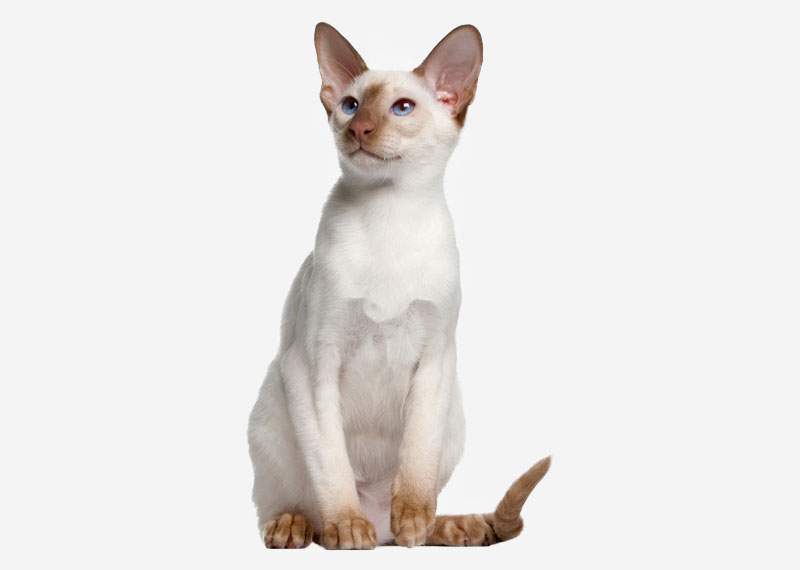 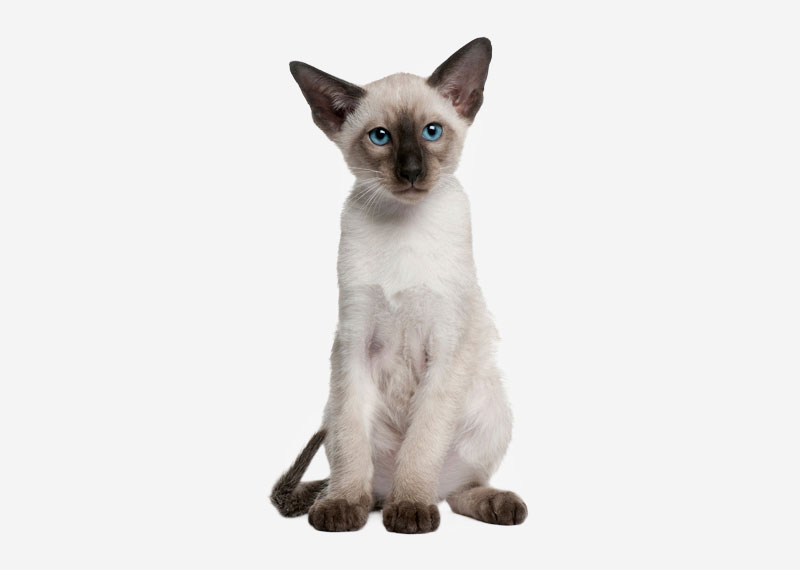 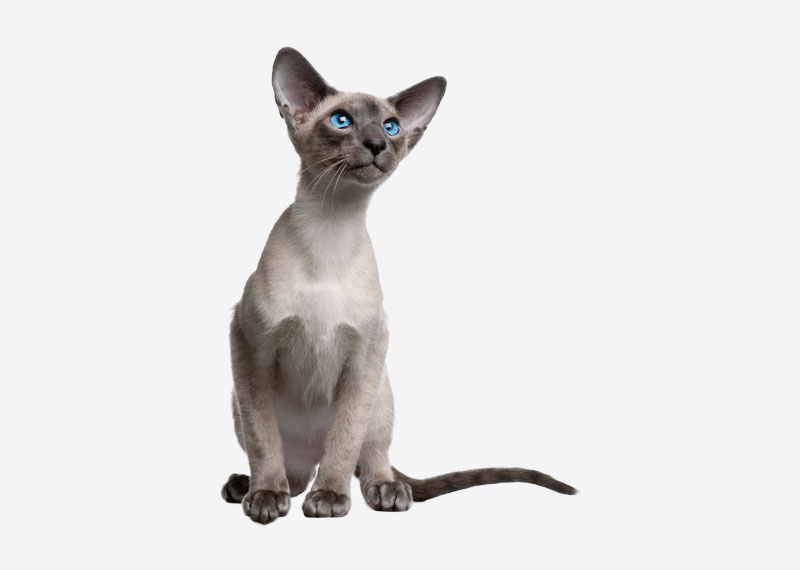 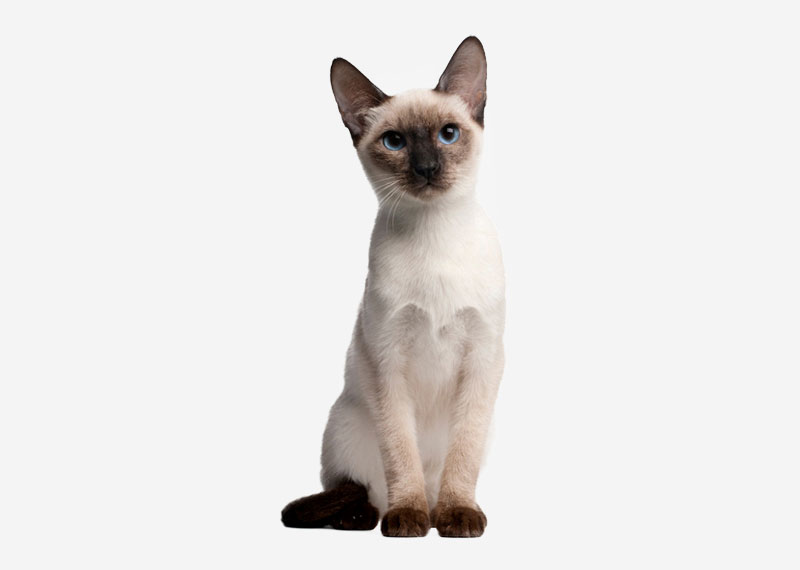 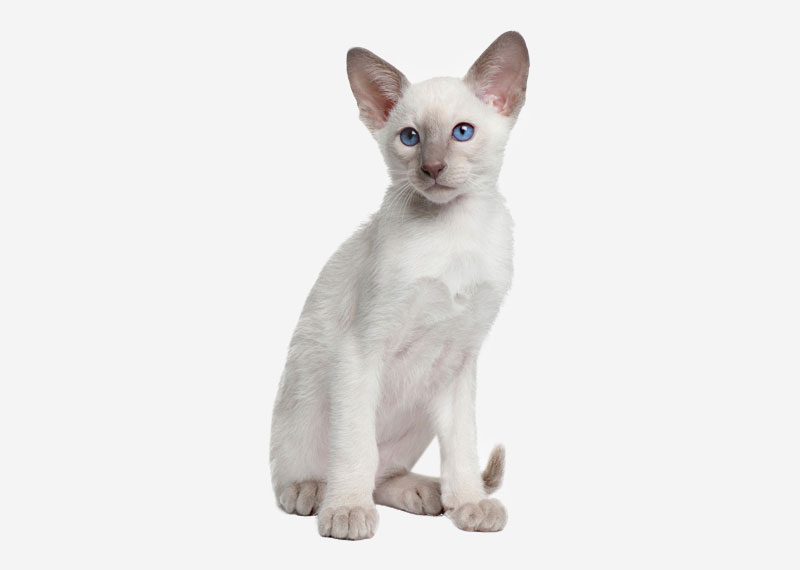 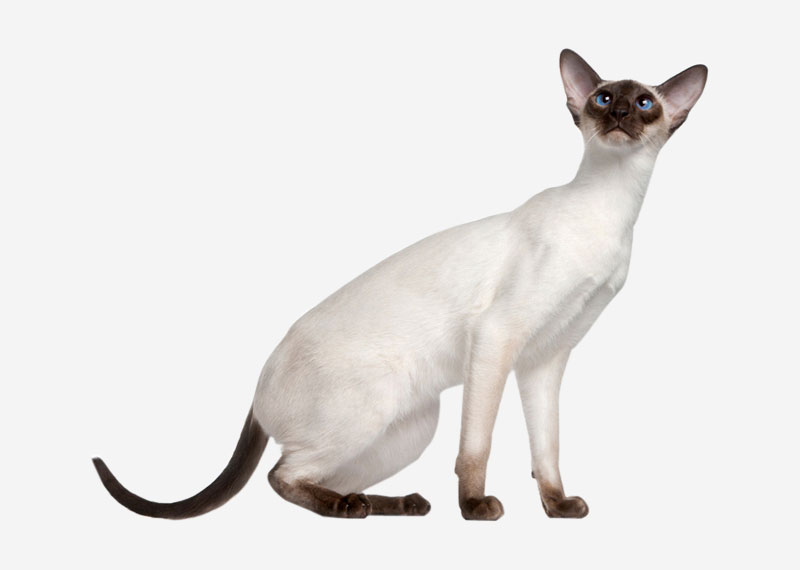